The Clue in the Old Stagecoach (Nancy Drew Mystery #37)
by Adams, Harriet Stratemeyer

Dust Tracks on a Road
by Hurston, Zora Neale

Of Mice and Men
by Steinbeck, John

Death on the Riviera (Superintendent William Meredith #4)
by Elmore, Ernest

Faded Page is an archive of eBooks that are provided completely free to everyone. The books are produced by volunteers all over the world, and we believe they are amongst the highest quality eBooks anywhere. Every one has been scanned, run through OCR software, proofed, formatted and assembled extremely carefully, using hundreds of volunteer hours. These books are public domain in Canada (because we follow the Canadian copyright laws), but if you are in another country, you should satisfy yourself that you are not breaking the copyright laws of your own country by downloading them. You are free to do whatever you like with these books, but we hope that mainly...you will enjoy reading them.

Popularity: By Book By Author 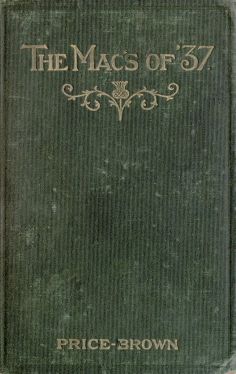 The Novels of John Price-Brown

John Price-Brown (1844-1938) was an English born Canadian author. His family emigrated to Upper Canada when he was a child. He studied at the University of Toronto to become a medical doctor. He was well known in Toronto as a nose and throat specialist which led to the publication of his first book in 1900, Diseases of the Nose and Throat.

He began to write novels after this using a pen-name, Eric Bohn. In his later life, progressive blindness forced him to retire from medicine and also inhibited his writing. He still managed to write five historical novels, four of which are available on Faded Page.

In particular is his tale about the Upper Canada Rebellion (depicted in the image above) in 1837, entitled, The Mac’s of ’37. It achieved considerable popularity at the time of publication and is rated in present-day histories of Canadian literature as one of the best books of Canadian vintage dealing with a purely Canadian topic.

His final book, Laura, the Undaunted tells the story of Laura Secord. The book details her life culminating in her famous participation in the War of 1812.

Help us add more public domain books like these by volunteering to proofread a few pages! For information, go to Distributed Proofreaders Canada.

Thanks to the Dusty Bookcase for research concerning the author.