Light in August
by Faulkner, William

Descent into Hell
by Williams, Charles

The Clue of the Whistling Bagpipes (Nancy Drew Mystery #41)
by Adams, Harriet Stratemeyer

The Bell Jar
by Plath, Sylvia

Faded Page is an archive of eBooks that are provided completely free to everyone. The books are produced by volunteers all over the world, and we believe they are amongst the highest quality eBooks anywhere. Every one has been scanned, run through OCR software, proofed, formatted and assembled extremely carefully, using hundreds of volunteer hours. These books are public domain in Canada (because we follow the Canadian copyright laws), but if you are in another country, you should satisfy yourself that you are not breaking the copyright laws of your own country by downloading them. You are free to do whatever you like with these books, but we hope that mainly...you will enjoy reading them.

Popularity: By Book By Author 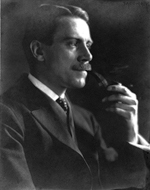 Hulbert Footner (1879-1944) was a Canadian author of mystery and detective fiction. Born in Hamilton, Ontario he attended grade school in Manhattan, New York where his mother lived. Following grade school, he was self-educated and began initially writing poetry and plays and persuing his love of long-distance canoeing. After accepting a reporting job in 1906 on the Calgary Morning Albertan, he began a 3000-mile solo canoe journey exploring the northern part of the province, syndicating the story of his journey to Canadian newspapers.

He wrote many short stories and novels based on his early adventurous canoe voyages which were serialized in Cavalier, Western Story Magazine, Argosy, Munsey’s and Mystery magazines and then published later as novels such as Jack Chanty. His friend Christopher Morley, a writer of books and poetry, steered him past an overdose of northwestern stories into crime stories, adventure and romance. His most successful creation was the beautiful and brilliant Madame Rozika Storey and her plain assistant who explains the evolving solutions to her boss’ cases. These cases appeared in Argosy All-Story Weekly from 1922 through 1935 for a total of 30 stories. Footner is also known for his Amos Lee Mappin mystery series, with a New York mystery writer who is far less flamboyant than Madame Storey, and for a third Private Investigator series.

Here at Faded Page, we feature the Madame Storey series and Amos Mappin Mystery series as well as many other titles of adventure, crime and romance such as Jack Chanty, A Self-Made Thief, The Obeah Murders, and Sinfully Rich.

If you want to see more mysteries and adventure e-books like these on Faded Page, come and join us and proofread a few pages. For more information about how to volunteer, check out our companion site, Distributed Proofreaders Canada.