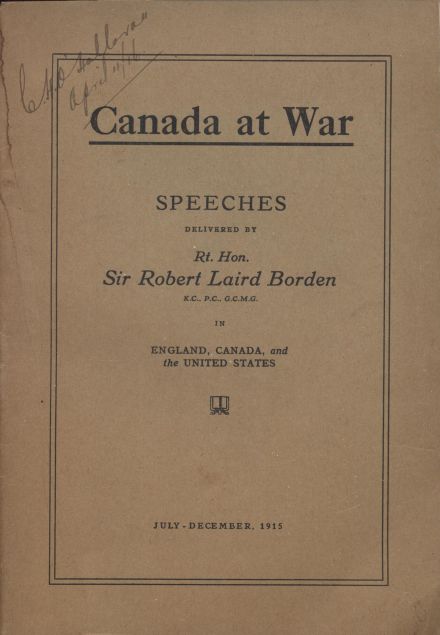 Sir Robert Borden (1854-1937) was the Prime Minister of Canada from 1911 to 1920. Born and raised in Nova Scotia, he trained as lawyer and was called to the bar in 1878. By 1890 he was leading one of the top law firms in Halifax. His commitment to public service led him to seek entry to the Federal House of Commons and he was elected in 1896. Five years later he was selected to lead the Conservative party and in 1911 led the party to victory over Wilfrid Laurier's Liberals. During the next nine years as PM, he led the country through the First World War, introduced the income tax and began the nationalization of the Canadian National Railway. He was also responsible for mandatory conscription, a policy that was opposed by French-Canadians, and that legacy still reverberates through Canadian politics to this day. One of his greatest achievements was in getting Britain to recognize Canada and other colonies such as Australia and New Zealand as independent Dominions that deserved to be recognized internationally as countries in their own right and allowed Canada to sit on the new League of Nations as an independent member. He retired from politics in 1920 and served as chancellor of Queen's University from 1924 to 1930. (Canadian Encyclopedia)