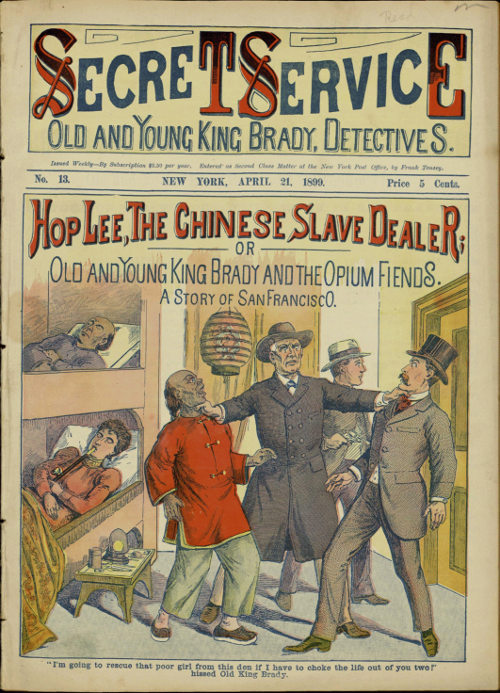 US numismatist, scholar, screenwriter and author whose well written, ingenious and original dime novels (see Dime-Novel SF) have often been considered the finest examples of the category. His better stories present a succession of highly imaginative strokes, often with good historical backgrounds. The title figure in "The Man in the Black Cloak" (1886 The Boys of New York) as by P T Raymond – a man whose betrayal has turned him virtually into a living skeleton, and who in proto-Superman fashion tracks down evil-doers in the City – may be a direct precursor to The Shadow, as Jess Nevins suggests in The Encyclopedia of Fantastic Victoriana (2005). "I": A Story of Strange Adventure (23 July-3 September 1887 The Boys of New York as by Gaston Garne; 1902) as by Richard R Montgomery describes a double quest, for a beautiful She Who Is Never Seen and for a remarkable manuscript hidden by Saint Cyprian. The Cavern of Fire; Or, the Thrilling Adventures of Professor Hardcastle & Jack Merton (15 September-3 November 1888 The Boys of New York; 1901) as by Allyn Draper uses as its departure points (a) the theory that the Mound Builders were ancient Greeks and (b) a Hollow Earth filled with teratological peoples. Two Boys' Trip to an Unknown Planet (17 August-5 October 1889 The Boys of New York as by Albert J Booth; 1901 as by Richard R Montgomery) is an astronomical fantasy, often on a mythic level, set on a planet circling Sirius; it may have been a source of motifs for David Lindsay's A Voyage to Arcturus (1920). "Where?": Or, Washed into an Unknown World (14 December 1889-1 February 1890 The Boys of New York as by Robert Maynard; 1901) as by "Noname" takes place in a strange Antarctica filled with grotesque peoples and superscientific devices reminiscent of Bulwer Lytton's vril. 3,000 Miles through the Clouds; Or, Dropped Among an Unknown Race (13 February-2 April 1892 The Boys of New York as by Gaston Garne; 1913) as by Berton Bertrew, which takes elements from Jules Verne's The Mysterious Island (trans 1875), puts three comrades into wildly imaginative situations in an Arctic crater. Perhaps also by Doughty is Al and his Air-Ship (1903) as by Gaston Garne, which describes scientifically advanced giants in Antarctica, remarkable flying machines powered by a vril-like source, and other marvels. An adult sf novel, Mirrikh; Or, a Woman from Mars: A Tale of Occult Adventure (1892), although highly imaginative – incorporating Planetary Romance and Lost World episodes into its sweep – was not especially successful. [EFB/JC/DRL]--sf-encyclopedia.com.