A Canadian History for Boys and Girls 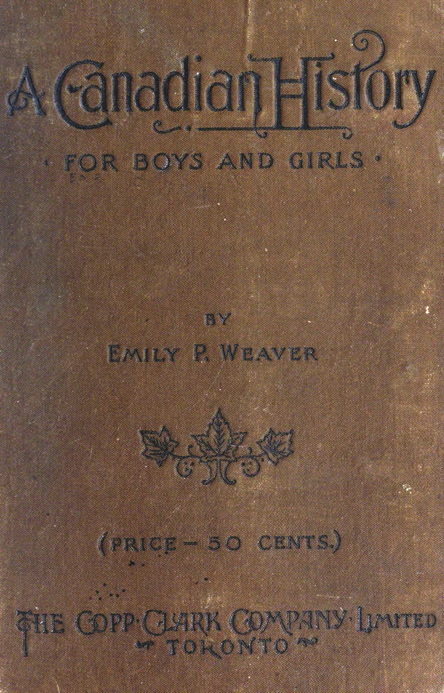 Emily Poynton Weaver (1865-1943) was a Canadian writer. She was born in Manchester, England and emigrated to Canada with her family as a teenager. Initially living in Waterloo, Ontario, they later moved to Toronto. During her early adulthood, she began to write short stories and historical essays for the magazine trade. She was a prolific writer completing several novels and non-fiction works for history and textbooks. Her primary support came through journalism, notably the Globe newspaper in Toronto (precursor to the Globe & Mail). Many of Weaver's books were published by church-based companies which reflected the high moral tone of her fiction. Her novel My Lady Nell won a prize in 1890 from the Congregationalist Society of Boston. She also wrote books for children which were illustrated by her sister, Anne Elizabeth Weaver. (Canada's Early Women Writers)

Anne Elizabeth Weaver (1862-1944) was a Canadian illustrator. She was born in Manchester, England and emigrated to Canada as a teenager with her family. The family initially lived in Waterloo, Ontario later moving to Toronto. She studied art in several schools including the Central Ontario School of Art and the Philadelphia School of Design for Women. She worked as an art teacher and served as Director of Drawing for Halifax Public Schools and taught china painting at the Halifax School of Art. She was known for illustrating books written by her sister, Emily Poynton Weaver, including A Canadian History for Boys and Girls and Old Quebec, The City of Champlain, both of which are available at Faded Page. (Canada's Early Women Writers)