The Selected Poems of Marjorie Pickthall 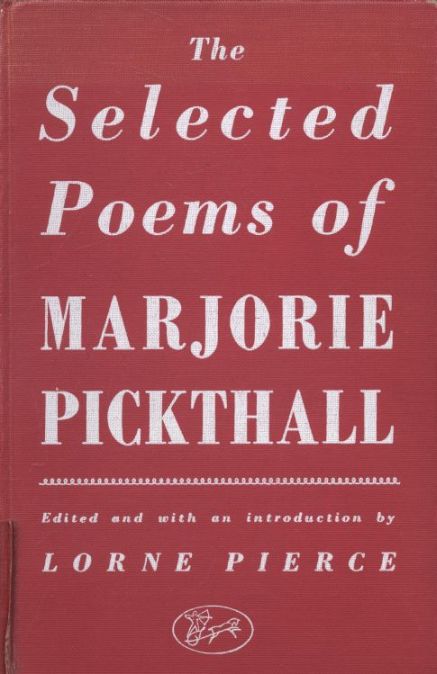 Marjorie Pickthall (1883-1922) was a Canadian poet and novelist. She was born in England but her family emigrated to Canada when she was six. Educated at St. Mildred's Girls School and Bishop Strachan School for Girls, her parents encouraged her reading and writing and musical talents. She published her first story, "Two Ears", at the age of 15 in the Toronto Globe and also wrote stories for the Mail and Empire. In 1910, she took the death of her mother particularly hard and she needed the help of poet friend Helena Coleman to get her back on her feet with a job as librarian at Victoria College. Over the next eight years she journeyed to England and then eventually to British Columbia where she settled on Vancouver Island. During her travels and sojourns in England and B.C. she continued to write both poems and novels. She died of a blood clot following surgery to correct health problems which she suffered throughout her life. (Simon Fraser University: Canada's Early Women Writers, Oxford Companion to Canadian Literature)

Lorne Pierce (1890-1961) was a Canadian publisher and editor. Born in eastern Ontario, he was educated at Queen's University, the University of Toronto and the Wesleyan Theological School in Montreal. He was ordained as a Methodist Church minister and later became a United Church minister. In 1920 he was appointed literary adviser at Ryerson Press in Toronto. Two years later he became editor, a position he remained in until 1960. During his tenure he fostered the careers of several well known authors including E.J. Pratt, Earle Birney, Dorothy Livesay and A.J.M. Smith. He authored and published numerous books on Canadian literature and history. He instigated three series of short books on literature to promote Canadian literature to the general public. He created the Lorne Pierce award for the recognition of excellence in Canadian literature and criticism which is now administered by the Royal Society of Canada. He was also a leading founder of the Canadian Writers' Foundation. During his life he amassed an important collection of Canadian books, letters and manuscripts which he donated to Queen's University. (Oxford Companion to Canadian Literature)