The Last Time I Saw Paris 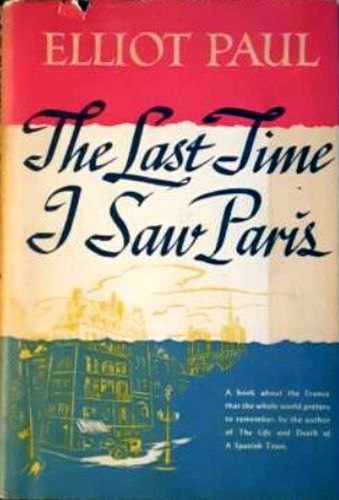 Novelist and journalist Elliot Harold Paul was born on February 10, 1891 in Malden, Massachusetts. In 1917, he joined the army and went to France during World War I. On his return, he became a journalist. His first novel about his experiences Indelible came out in 1922. Paul was a great believer in marriage, getting married and divorced five times in his life. At the end of his first marriage in 1925, he moved to Paris and the American literary community in Montparnasse. He worked as a journalist on the international editions of American newspapers and at transition, an experimental literary journal. He was friends of both James Joyce and Gertrude Stern. In 1931, after a few more novels, he had a nervous breakdown and disappeared off the Paris scene to Santa Eulària des Riu, on Ibiza, the location of his Life and Death of a Spanish Town (1937). In 1936, with the arrival of the Spanish Civil War there, he fled with his family back to Paris and began his Homer Evans series of detective novels. Following the end of anther marriage and the start of the next, and oh yes, the outbreak of the Second World War, he moved to Los Angeles and became a screenwriter, supplementing his income playing piano in area clubs. Given his Parisian background, it is not surprising that he had little use for the industry’s moralizing Hays Act strictures which he satirized in his 1942 With a Hays Nonny Nonny, where he took stories from the Bible and revised them to conform with the Act. It was also in 1942 that he produced perhaps his finest work The Last Time I Saw Paris about a Paris street, its people, and the author’s life there between the Two Wars. Like his Life and Death of a Spanish Town, Paul celebrates ordinary life until war and politics change everything. After another war and another marriage, Elliot Paul died on April 7, 1958 at the Veterans' Hospital in Providence, Rhode Island.