Sapphira and the Slave Girl 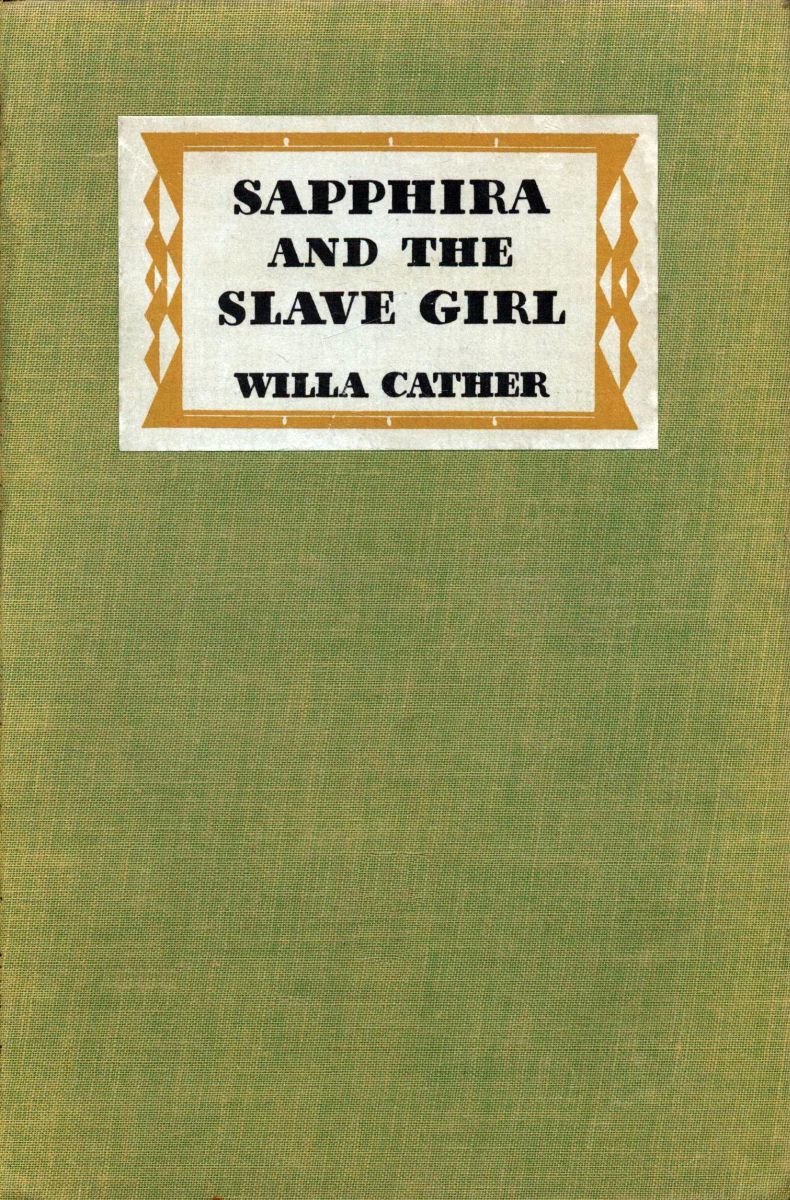 Willa Cather (7 December, 1873—24 April, 1947) born Wilella Sibert Cather was a novelist noted for her portrayals of the settlers and frontier life on the American plains. She received the Pulitzer Prize in 1923 for her novel One of Ours. Cather followed that up with Death Comes for the Archbishop in 1928, included on the Modern Library 100 Best Novels of the twentieth century as well as Time’s one hundred best English-language novels from 1923 to 2005.

At age 9 Cather moved with her family from Virginia to frontier Nebraska, where from age 10 she lived in the village of Red Cloud. There she grew up among the immigrants from Europe—Swedes, Bohemians, Russians, and Germans—who were breaking the land on the Great Plains.

At the University of Nebraska, she showed a marked talent for journalism and story writing, and on graduating in 1895 she obtained a position in Pittsburgh, Pennsylvania, on a family magazine. Later she worked as copy editor and music and drama editor of the Pittsburgh Leader. She turned to teaching in 1901 and in 1903 published her first book of verses, April Twilights. In 1905, after the publication of her first collection of short stories, The Troll Garden, she was appointed managing editor of McClure’s magazine, the New York muckraking monthly. After building up its declining circulation, she left in 1912 to devote herself wholly to writing novels.

Cather’s first novel, Alexander’s Bridge (1912), was a factitious story of cosmopolitan life. Under the influence of Sarah Orne Jewett’s regionalism, however, she turned to her familiar Nebraska material. With O Pioneers! (1913) and My Ántonia (1918), which has frequently been adjudged her finest achievement, she found her characteristic themes—the spirit and courage of the frontier she had known in her youth. One of Ours (1922) and A Lost Lady (1923) mourned the passing of the pioneer spirit. In her earlier Song of the Lark (1915), as well as in the tales assembled in Youth and the Bright Medusa (1920), including the much-anthologized “Paul’s Case,” and Lucy Gayheart (1935), Cather reflected the other side of her experience—the struggle of a talent to emerge from the constricting life of the prairies and the stifling effects of small-town life.

A mature statement of both themes can be found in Obscure Destinies (1932). With success and middle age, however, Cather experienced a strong disillusionment, which was reflected in The Professor’s House (1925) and her essays Not Under Forty (1936). Her solution was to write of the pioneer spirit of another age, that of the French Catholic missionaries in the Southwest in Death Comes for the Archbishop (1927) and of the French Canadians at Quebec in Shadows on the Rock (1931). For the setting of her last novel, Sapphira and the Slave Girl (1940), she used the Virginia of her ancestors and her childhood.