Heaven Lies About Us 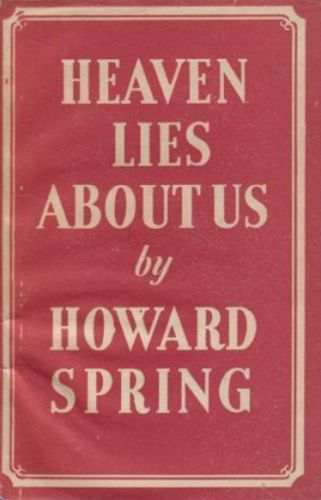 Howard Spring (10 February 1889–3 May 1965) was a Welsh author and journalist who wrote in English. He began his writing career as a journalist but from 1934 produced a series of best-selling novels for adults and children. The most successful was Fame Is the Spur, which was later adapted into a film starring Michael Redgrave and, later still a BBC TV series.

Born in Cardiff, the son of a jobbing gardener, Spring was forced to leave school at the age of twelve, when his father died, to start work as an errand boy. He later became an office boy at a firm of chartered accountants in Cardiff Docks and then a messenger and later a reporter at the offices of the South Wales Daily News. In 1911, he moved to the Yorkshire Observer. Spring moved to the Manchester Guardian in 1915 and stayed for over fifteen years. He reported on the First World War and during the conflict worked for the Intelligence Department in France.

Spring was a successful writer, who combined a wide understanding of human character with technical skill as a novelist. His method of composition was painstaking. Each morning he would shut himself in his room and write a thousand words, steadily building up to novels of around 150,000 words. He rarely made major alterations to his writings.