The Buck in the Snow 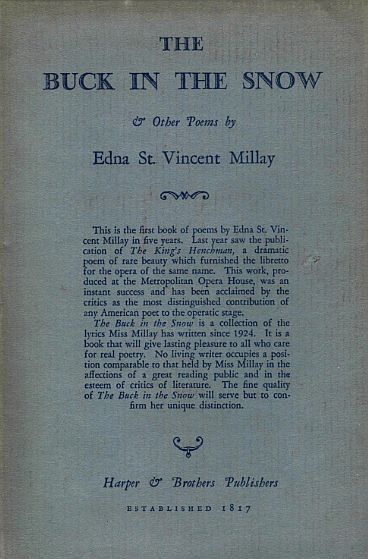 Edna St. Vincent Millay was an American lyrical poet and playwright and was also known for her feminist activism. She received the Pulitzer Prize for Poetry in 1923 for "The Ballad of the Harp-Weaver", the third woman to win the award for poetry. She used the pseudonym Nancy Boyd for her prose work. "Renascence" and "The Ballad of the Harp-Weaver" are often considered her finest poems.

Millay's fame began in 1912 when, at the age of 20, she entered her poem "Renascence" in a poetry contest in The Lyric Year. The poem was widely considered the best submission, and when it was ultimately awarded fourth place, it created a scandal which brought Millay publicity. In 1919, she wrote the anti-war play Aria da Capo, which starred her sister Norma Millay at the Provincetown Playhouse in New York City. Millay’s 1920 collection A Few Figs From Thistles drew controversy for its exploration of female sexuality and feminism. In 1923 with "The Ballad of the Harp-Weaver", she writes a tribute to her mother, a story of a penniless, self-sacrificing mother who spends Christmas Eve weaving for her son “wonderful things” on the strings of a harp, “the clothes of a king’s son.”

In August of 1927, Millay became involved in the Nicola Sacco and Bartolomeo Vanzetti case. On August 22, she was arrested for picketing the State House in Boston, protesting the execution of the Italian anarchists convicted of murder. The experience increased her political disillusionment, bitterness, and suspicion, and it resulted in her article “Fear,” and some of the poems of her next volume, The Buck in the Snow, and Other Poems.

Millay began to go on reading tours in the 1920s. Afflicted by neuroses and a basic shyness, she thought of these tours as ordeals. Nonetheless, she continued the readings for many years, and for many in her audiences, her appearances were memorable. When she read at the University of Chicago in late 1928, she had much the same effect on George Dillon, the man who inspired the love sonnets of the 1931 collection Fatal Interview.

By the 1960s the Modernism espoused by Eliot, Pound, Carlos Williams, and Auden had assumed great importance, and the romantic poetry of Millay and other women poets was largely ignored. But the spread of feminism eventually revived an interest in her writings, and she regained recognition as a highly gifted writer.