The Menace from Andromeda 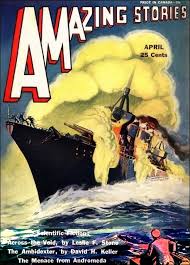 Arthur Leo Zagat (1896-1949) was an American author of pulp fiction. During his career he wrote over 500 short stories. Most of it was adventure fiction which followed the exploits of some his favourite characters such as Doc Turner or Red Finger. He also dabbled in science fiction, several of which are posted here on Faded Page. Popular stories include "The Land Where Time Stood Still" and "Venus Mines, Incorporated". (Encyclopedia of Science Fiction)