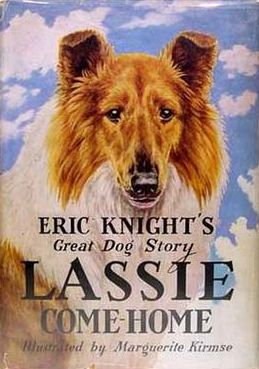 Eric Mowbray Knight was an English novelist and screenwriter born in Yorkshire who is mainly known for his 1940 novel Lassie Come-Home and for This Above All, considered one of the significant novels of the Second World War.

After his mother moved the family to the United States in 1912, he began a varied career, including service in the Princess Patricia's Canadian Light Infantry during World War I as a signaller and then served as a captain of field artillery in the U. S. Army Reserve until 1926. He did stints as an art student, newspaper reporter and Hollywood screenwriter and co-authored the film, Battle of Britain in the "Why We Fight" Series under the direction of Frank Capra.

Knight and his second wife Jere Knight raised collies on their farm in Bucks County, Pennsylvania. His novel Lassie Come-Home appeared in 1940, expanded from a short story published in 1938 in The Saturday Evening Post. The novel was adapted to film by MGM in 1943 as Lassie Come Home with Roddy McDowall in the role of Joe Carraclough and canine actor Pal in the role of Lassie. The success of the novel and film generated more films and eventually several television series, cementing Lassie's icon status.

In 1943, when he was a major in the United States Army–Special Services film unit, Knight was killed in a C-54 air crash in Dutch Guiana in South America. One of his last books, Sam Small Flies Again, republished as The Flying Yorkshireman, included the character Sam Small, a villager from Knight's beloved Yorkshire whose stock in trade was an endless parade of outrageous lies and tall tales.