Summer Cruise in the Mediterranean on board an American frigate 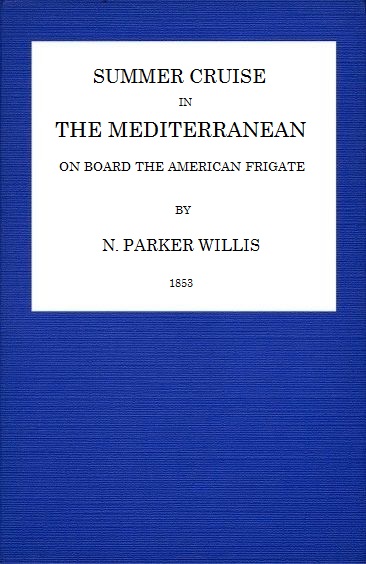 Nathaniel Parker Willis, aka N. P. Willis, was born on January 20, 1806 in Portland, Maine into a family of small newspaper owners. In the 1830s and 1840s, he became the highest paid magazine writer in the U.S. His style was personal, and he addressed his readers directly. His travelogues were especially popular, letting his readers, through his experiences, into the travel habits of the upper crust. Critics of his day called him effeminate and a dandy. Modern ones view him as overly sentimental.

He knew many of the writers of his day, including Henry Wadsworth Longfellow, Washington Irving, and Charles Dickens. He was a supporter, defender, and friend of Edgar Allan Poe. He first printed Poe’s “The Raven” in the January 29, 1845 issue of the New York Evening Mirror, where he was editor, which helped make Poe famous. In 1846, he started, along with George Pope Morris, a magazine the Home Journal, renamed in 1901 as Town & Country. It is now the oldest continually published general interest magazine in the U.S. Although he continued to edit at the Home Journal he largely retired to his home in Idlewild. In his later years, he suffered from epilepsy and died on his birthday on January 20, 1867, forgotten by the public although his pallbearers included Longfellow, James Russell Lowell, and Oliver Wendell Holmes.