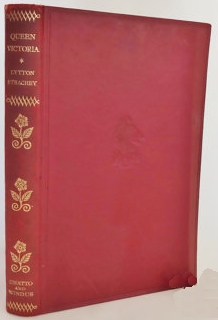 Giles Lytton Strachey (1880-1932) was an English biographer. Born in London, his father was a noted military officer who served in India. His mother was a leading supporter of women's suffrage. He was educated at Cambridge University where he studied history and philosophy. He began writing in the 1910s and published his first successful book in 1918, "Eminent Victorians". He followed this with his successful biography of Queen Victoria. He died in 1932 from stomach cancer but several books of his were published posthumously. (Lytton Strachey: His Mind and Art - Charles Richard Sanders)

Heinrich von Angeli (1840-1925) was an Austrian painter famous for his portrait paintings of European aristocracy. Born in Odenburg, he studied at the Vienna Academy of Fine Arts. After 1870, he travelled around Europe frequenting the courts of nobility where he became a favourite artist for their portrayal in art. Some of his notable subjects included Queen Victoria and Edward VII. (National Portrait Gallery)

Edward Henry Corbould (1815-1905) was a British artist. Born in London, his father and grandfather were both noted painters. He studied as the Royal Academy and began producing art in the 1840s. In 1851, he was appointed as an instructor for painting to the Royal Family, a position he held for 21 years. He also illustrated books and magazines such as Cassell's Magazine and the Illustrated London News. (Oxford Dictionary of National Biography)

Edwin Henry Landseer (1802-1873) was an English painter and sculptor. Born in London, he showed talent at an early age. He exhibited works at the Royal Academy when he was just 13. He was famous for his paintings of animals such as horses, dogs, and deer. His most notable sculptures were the lions in Trafalgar Square. (Oxford Dictionary of National Biography)