The Measure of the Rule 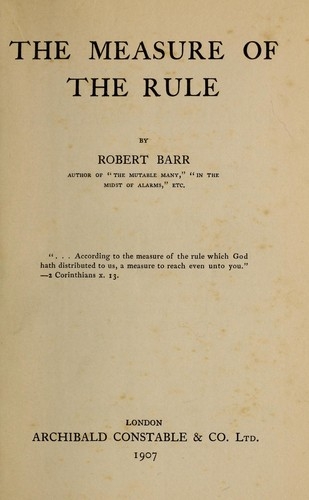 In 1881 Barr decided to "vamoose the ranch", as he stated, and relocated to London, to establish there the weekly English edition of the Detroit Free Press. In 1892 he founded the magazine The Idler, choosing Jerome K. Jerome as his collaborator (wanting, as Jerome said, "a popular name"). He retired from its co-editorship in 1895. In London of the 1890s Barr became a more prolific author—publishing a book a year—and was familiar with many of the best-selling authors of his day, including Bret Harte and Stephen Crane. Most of his literary output was of the crime genre, then quite in vogue. When Arthur Conan Doyle's Sherlock Holmes stories were becoming well-known Barr published in the Idler the first Holmes parody, "The Adventures of Sherlaw Kombs" (1892), a spoof that was continued a decade later in another Barr story, "The Adventure of the Second Swag" (1904). Despite the jibe at the growing Holmes phenomenon Barr and Doyle remained on very good terms. Doyle describes him in his memoirs Memories and Adventures as, "a volcanic Anglo—or rather Scot-American, with a violent manner, a wealth of strong adjectives, and one of the kindest natures underneath it all."--Wikipedia.