The Adventures of Herr Baby 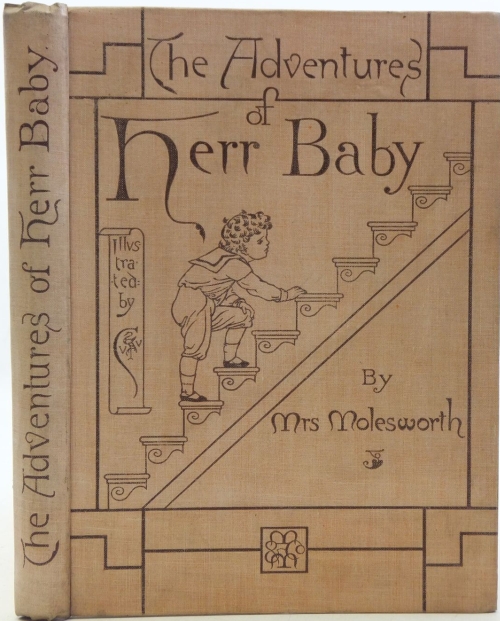 Mary Louisa Molesworth, née Stewart (29 May 1839 – 20 January 1921) was an English writer of children's stories who wrote for children under the name of Mrs Molesworth. Her first novels, for adult readers, Lover and Husband (1869) to Cicely (1874), appeared under the pseudonym of Ennis Graham. Her name occasionally appears in print as M. L. S. Molesworth.

Typical of the time, her young child characters often use a lisping style, and words may be misspelt to represent children's speech—"jography" for geography, for instance.

She took an interest in supernatural fiction. In 1888, she published a collection of supernatural tales under the title Four Ghost Stories, and in 1896 a similar collection of six tales under the title Uncanny Tales. In addition to those, her volume Studies and Stories includes a ghost story entitled "Old Gervais" and her Summer Stories for Boys and Girls includes "Not exactly a ghost story."--Wikipedia.

Walter Crane was born in Liverpool on August 15, 1845 and died on March 14, 1915 in Horsham, West Sussex. He was an influential figure in the illustration of children’s literature at the turn of the Twentieth century. His father was a portrait painter. He got technical training, and an appreciation for it, while indentured to a wood engraver for three years. His influences were the Pre-Raphaelites, John Ruskin, John Tenniel, the illustrator of Alice in Wonderland, Classical artwork such as the Elgin marbles, and, like many artists of his time, Japanese wood prints. He was part of the Arts and Crafts movement. He was also an ardent socialist. In 1863, he was hired by Edmund Evans to illustrate some of the cheap yellowback novels he was printing. The following year, Evans had him begin the illustration of a series of sixpenny toy books. From 1865 to 1876, they began a collaboration on toy books of nursery rhymes and fairy tales, turning out two or three of them a year.

Crane’s work was characterized by sharp outlines and flat tints. His focus on unity of design led him increasingly to meld the printed text with his artwork. Moving from three color ink, he began to use watercolor washes with lithographs of his line drawings. Like the Pre-Raphaelite artist and designer William Morris, with whom he worked and collaborated in the 1980s and 1890s, he worked in many media, illustration, painting, stained glass, ceramics, textiles, and wallpaper.